Years follow each other but do not look alike… After a beautiful season of 2015 and magnificent harvest, the winter was relatively soft. The only minus temperature were felt in March and more especially in April. In a rather exceptional way, the mercury dived until -4C entailing snowfalls on April 26th.

Whom the fault is that?  Well, it is because of the red moon…

What is red moon ?

We call it Red Moon not because of its colour, but because it turns the new shoots brown. Present during the cycle of the moon which follows the Easter week-end, it exercises a strong influence on the weather change. As it is said:

The effects of frost were devastating for certain plots of land. Dependant of the nature, we can only note the consequences. Today, 2 weeks after, nearly 50% of our vineyard is deeply affected.

Chardonnay, being the first grape variety to bud, were the most affected by the weather.

Frost and vineyard : What is important to know …

All the grapes varieties are not equal. All the main buds are accompanied of secondary buds that appear later. However, these buds will only give new grapes for the pinot noir (with less quantity), those of Chardonnay are not able to give grapes.

The cold weather also affected the bud burst of the no frozen buds, leading to a delay of 2 weeks of the vegetation. Yes, growing is a hard work sometimes!

With a Rock’N’Roll beginning of the season, we hope the better conditions for the future! 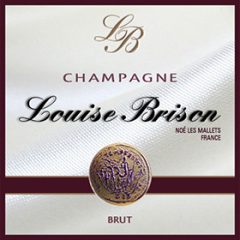 Since 3 generations, Louise is the symbol of vintage Champagne. Each year, this special wine bears the speciality of our terroir. Dressed in white or pink, the freshness of its fragrance, with fruity and subtle woody notes, awakes the papillae with elegance.

Vintage corresponds to the year of grape harvest of grapes having served to produce a wine. In other words, vintage champagne is developed with grapes resulting from the same year only.

Most of the time, in champagne, the wine grower dates only very good years.
Vintage is necessarily indicated on the label of the bottle.

Because every year is different, Louise Brison chose the path of the vintage for each so that all can express their own feelings.